Home » Misc » How to robotic dance

How to robotic dance

How to do the robot

Want more? Get the full Course:

The Ultimate Popping Dance Course (Beginner to Advanced)
Learn how to dance popping and locking with step by step video lessons. You will learn hits/popping, waving, robotics, gliding, vibrating, slow motion effects and more. Become the freestyler you always wanted to be and impress your friends with your dance moves. Includes 3+ hours of video lessons. You can download it instantly or stream it online here.
Learn more & Buy it here (Click here)

If we go to one of the purest forms and definitions of popping, it is actually to act or imitate as a robot. Robotics is all about dime stops. So dime stops is another huge fundamental dance style of popping. And it is the ability to freeze at a point in time.

Now technically speaking, you don’t even really have to hit to do dime stops. It’s more of just about the freeze. You definitely see a lot of poppers do a miniature hip when they dime stop.

Dime stop is definitely used a lot in robotics and I think it’s a great tool to use to develop patience when you dance. Starting out, it’s really easy to get caught in, “I got to do this. I got to go over here and do that.” But dime stops force you to freeze. So practicing dime stops can develop patience which is an awesome thing to have starting out.

So dime stops are I think a really easy move you can do on the first try. It’s just about freezing. So I’m going to give you a pattern to follow. Start with the left and the right arm to match it. And I’m just going to pick four corners. So I’m going to go left, down, down right, right. Now, I want to add a little bit more. I’m going to start using my heels to turn. Heels. Head.

Robotics is actually I think one of my favorite dance styles. I found myself roboting throughout the whole day. Roboting is definitely something that you can take your natural day-to-day movements and turn that into robotic style kind of dime stops.

So for example, let’s say I’m at dinner table. That’s the way I’m going to sit down. I put my arms out, set my plate right here, instead of just reaching out to get my fork and grab, I can go. So really, it’s just about using a regular way of doing things and thinking like a robot and using dime stops to kind of beat your communication for interpreting that as a dance.

I want you to think of a natural thing you do every day whether it’s brushing teeth or [0:02:26] [Indiscernible] and interpret that right now as a robot. If you were a robot, how would blank? OK? Fill that spot in. And we’ll catch you guys again.

You do not have to be a trained classical dancer to learn the robot dance.

The robot dance has two versions - the Michael Jackson one and the “everybody” robot dance. While you may take time to perfect the legendary Michael Jackson moves, you can try your legs and arms at the “everybody” robot dance, for sure. Moreover, with dedicated practice, you can master them in no time. The robot dance, also known as mannequin dance style, demands imitating the dancing motions of robots to come up with a crooked yet cool dance form. With a little patience and constant practice, you can melt hearts on the dance floor and have a good time. So what are you waiting for? Put on some dance music, like “Mr. Roboto” by Styx or “Kyur for Itch” by Linkin Park, and set the stage on fire. Learn some easy robot dance moves by steering through the instructions stated below. Watch all the heads turn as you display some of your coolest robotic dance moves amongst the crowd.

Set Your Back Taut

Remember, robots have their vertebrae missing and the whole idea behind doing a robot dance is to imitate robotic movements. 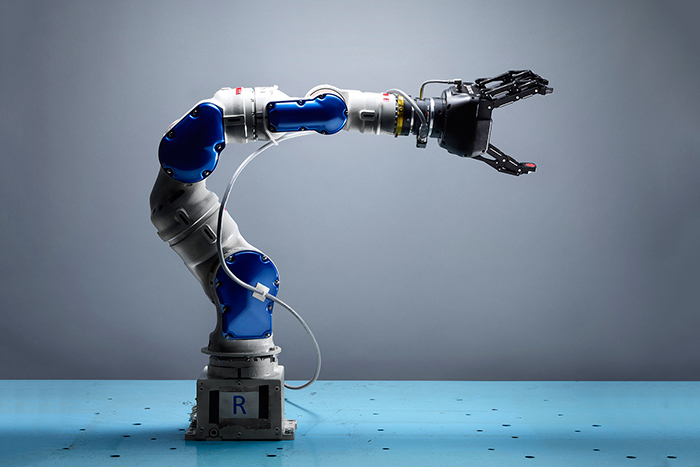 Thus, the accuracy of your movements will judge how successfully and efficiently have you done your robot dance. Therefore, keeping your back firm and stiff is the backbone of any robot dance move.

Bend both your arms at the elbow forming a 90 degree angle. Maintaining the position, raise one arm at a time, such that the open palm reaches your eye level. The move is one of the signature steps in a robot dance and should resemble a chopping motion. Alternately, raise your arms throughout the dance while maintaining a slow pace.

While raising your arms alternately at a slow pace, swivel your head from right to left, repeating the motion at regular intervals. Make sure that your neck and head are upright and taut to your best possibility. Combined with your arms, this completes the upper-body portion of the robot dance.

Though it is fine to keep your robot dance stationary, advanced robot dancers prefer to use their legs and move around displaying their skills and talent. To mete such potential robot companions, you can start walking around while performing the upper-body movements. However, maintain your pace in your walking as slow as in your arms and head. As your raise one arm, take a step, keeping your legs bent at the knees in 45 degree angle.

Bend At The Waist

After you have mastered the above steps, reveal your perfection and talent by continuing with this move. Keeping your back taut and stiff, perform all the steps combined together and bend at your waist in a 45 degree angle occasionally. While maintaining the bent position, you can let lose your arm swinging it back and forth like a pendulum. To show your flair and style, end your robot dance with a robotic bow.

Robot is one of the styles of modern street dance. The robot style was the basis of the popping dance style. The direction of the robot had a strong influence on the development of other directions, such as dubstep dance , electric boogie . Even in the hip-hop style, techniques taken from the robot style are used. Therefore, learning a robot will make your dance more expressive and stunning.

First of all, pay attention to fixing the dime stop and how to do isolations correctly. It is these things that give a feeling of mechanicalness and iron, creating the image of a terminator or a moving combine according to your desire))) Also, do not rush and do not try to keep up with the music, because your robot is not late for the train!

Another little secret that will allow you to blow the mind of any viewer. Try not just to move like a robot, but try to become a robot at the moment of the dance! Then all your movements will be transformed and become true!

There is a robot dance school in Moscow in Moscow. If you want to quickly master this direction under the strict guidance of experienced trainers - come, we will help :)

As such, there is no basic technique in this style, but it is replaced by the principles of dance performance. One of the most important principles is the principle of sequence of movements. That is, one next movement does not begin until the previous one ends. Of course, there are exceptions to this rule, as to any rule, but at first it helps a lot to avoid mess and confusion when performing a dance. Here, in general, the main thing you need to know for the successful development of this spectacular style!

Many beginners often have a question: what can be done in a robot? What movements can be used in robot dance? 80% of robotic movements are done with the hands.

So, you must know and be able to do it. In this lesson, the different options for how the hands should move will be analyzed in detail. Even using only them, you can create very cool numbers and introduce the viewer into a complete trance.

How to do inclinations correctly? Is it possible to use turns, and what is necessary for your body to become the body of a real "iron" robot. We will analyze the basic movements of the body during the dance, as well as you will learn about the principle of "fragmentation" and learn how to apply it.

5. Movement or gait of the robot. Online video lesson on the robot.

In this video tutorial you can learn how to walk like a robot. I will show several options for walking, which will make the image of a robot in your dance more solid and "iron". There are simple movements that are suitable for beginners, and a little more difficult. In any case, I'm sure that with just a little time, you can learn how to dance the robot! What's more, it's worth it!

Want to learn how to dance the robot really cool? So that when people see your dance, they stand with their mouths open? Then it's time to "tune" the technique and work on an important detail, such as "micro control". You will learn one concept that will help you stand out from other people and dancers.

Robot dance lessons for beginners and not only in Moscow. Come join us for a trial session. It's free :) To sign up for it - click on the pink button below. on August 18 in the capital of China, Beijing especially remembered the grand opening of the World Robotic Conference present thanks to the dance of the robotic dogs.

One hundred robot dogs produced by Unitree Robotics performed a dance dedicated to the tiger, the symbol of 2022. Attached to each of the robots was a tiger cub toy, which was designed using traditional Chinese technology.

During the conference, visitors will also be able to see the World Robot Exhibition, which will feature more than 500 different robots, including 30 completely new models that have not been seen by the general public before. The conference will run until August 21st.

Unitree Robotics actively supplies its robots to Russia. It was previously announced that the Unitree Robotics A1 robot dog, endowed with artificial intelligence, will be used by the Moscow Zoo to participate in the experiment.