Home » Misc » How to do the spongebob dance

How to do the spongebob dance

How to Spongebob the Right Way: From Hiphop to Shuffle

You are invited to a friend's birthday party.

The house is pumped up with base sound, and you've chugged in a few shots.

Ok now, it's time for some action. Ready to get down on the floor. This is the perfect time to show off what you've been practicing on. Is there a perfect move to prepare for this time?

Yes there is. It's called Spongebob.

The move isn't too technical even if you have just started out, yet it gives out a strong and bursting impression. Your energy-hungry crowd will be happy to have you in their place.

Let's learn how to make this party move.

Before going any further, do you wonder about the name? I know I do. My iconic childhood cartoon, Spongebob Squarepants.

I knew about hiphop Spongebob for a long time, but never paid attention to the name origin. As writing this blog post, I thought it would never been a more perfect time to look it up finally.

Ok. Unfortunately, I couldn't find the name origin of hiphop Spongebob. But as far as Squarepants go, it's distinctly different.

Apparently, Spongebob Squarepants was originally titled as SpongeBoy Ahoy. It's only after the copyright infringement worry that they changed it to Spongebob. Thanks copyrights for the wonderful cartoon name.

So that means the cartoon and hiphop Spongebob has no relation. The cartoon is not named after the dance move.

Now that we've got our childhood curiosity aside, let's dive into the method.

You might be wondering why practice Spongebob in the first place. Let me lay out some of its benefits.

Along with Runningman (although Spongebob is less well-known), this move is easy and straightforward. As long as you can jump and kick, you will get it.

If you are an athletic type, you can get a good hang of it in 1 hour.

It's not only easy to learn this move. It's also easy to carry out in different places. Especially in darkness, you want to show off a big and dynamic movement. That makes it perfect for a party.

Transitioning is one of the hardest things that haunts choreographer. It's hard to be creative. You cant simply walk to the next spot.

Being simple and dynamic makes it easy to incorporate into a different dance move.

Once you master it, you will have a very good understanding of side hop and transfer the weight on your leg axis. The movement could be as wide as you want, depending on how strong you kick. With this, you can easily move around the floor, making a transition and coordination easy in your choreography.

The moment you start practicing this, you will notice it right away. As much as it's simple to learn, Spongebob is not an easy piece physically. 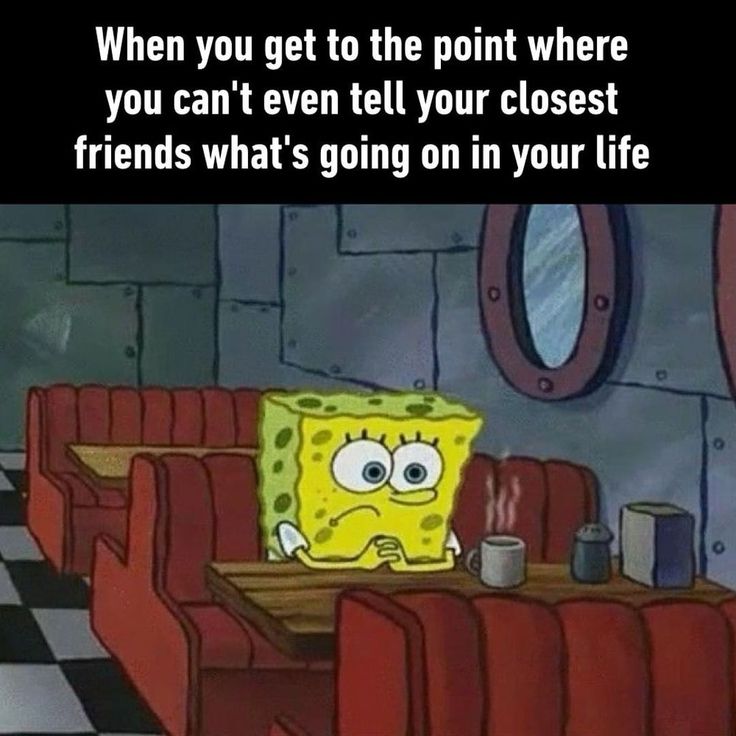 You are jumping side to side. Looking at that alone, it's not far different from bootcamp workout.

If you want to dance while losing weight and maintaining a healthy body, you want to pick a move that matches your goal.

As I wrote on a diet topic - "Is Dancing Aerobic or Anaerobic Exercise? Guideline to Losing Weight", some dance moves are more efficient than the other to burn your calories. What you want is an aerobic movement. Spongebob is.

As always, I've collected video tutorials I found online. You can find them in the bottom of the page. In the post, I will layout out more detailed practice tips and guide you to see the common pitfalls you should be aware of when you practice.

Did you know flamingo can stand in 1 leg for 4 hours?

They have some weird evolutionary strength working on their favor.

What about us? We humans can barely do 10 seconds.

But if you want to make your dance clean, you have to get used to it. 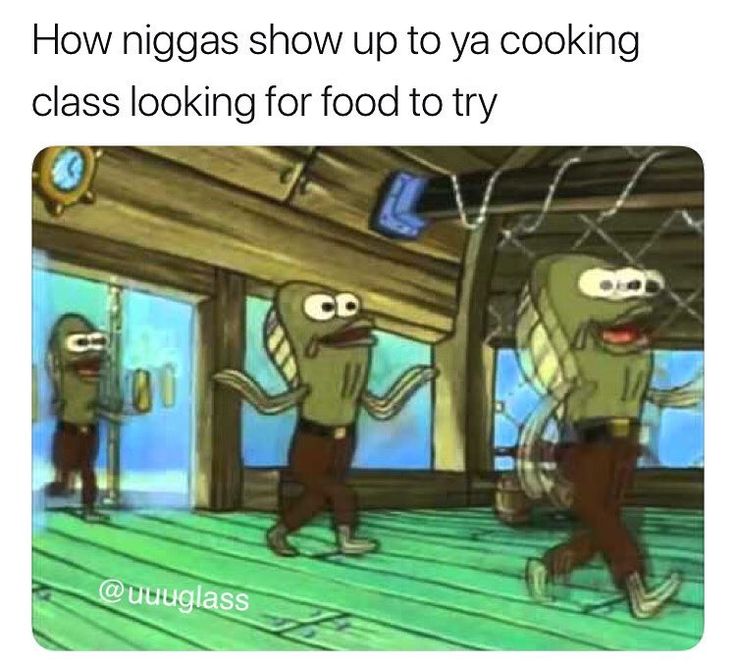 You need to get used to treating each leg move separately.

In Spongebob, the function of your leg is only 2: hopping and kicking. Very simple.

I recommend starting from hopping. You can ignore the kick for now. Just try to hop 1 leg at a time. Make sure you can feel your entire body weight go side to side, not just leg. And, if you look more carefully, you'll notice it's going from outside to the center.

Likewise, you can try the back kick on the spot. Doing it slowly without hopping, you see it's nothing but 1 leg bending backward like a racehorse waiting to jump out of the starting line.

There's no need to put on music at this point.

This is the time to get details right.

Clean Up the Kicking

Once you've got the basic mechanic right, it's time to practice with music.

You can start from the slow and mellow music. And slowly migrate to the faster one.

This is when precision matters.

In a fast pace, your kicking legs tend to move too much and things start to look shaky and messy. 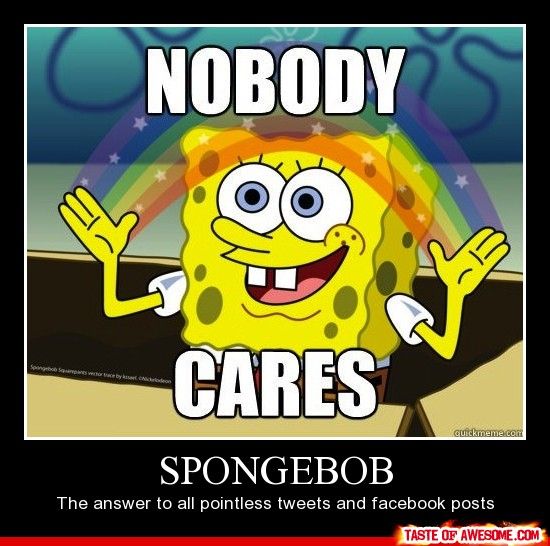 To fix this, try to pin your kneecap in one imaginary place (in the air) and move your calf only. You can think of it as leg isolation. Your knee is in the center of a clock and you are only trying to move the needle which is the calf.

Your Spongebob will look much sharper and properly on a beat.

Nailed down with all your favorite music?

It's time to add a twist. The above image focused the most basic back leg. But it doesn't mean that's all you can do with Spongebob.

Instead of kicking the leg from behind, bring it from the front. Your leg will be crossing in front of the other hopping leg.

Your dance will look more 3D, especially from the sideway.

So far, this description assumed hiphop style. Can we use this in other dance genres?

Yes. You certainly can.

Of all, I highly recommend you try out Shuffle.

Moves in Shuffle incorporates from all over ranging hiphop to house. 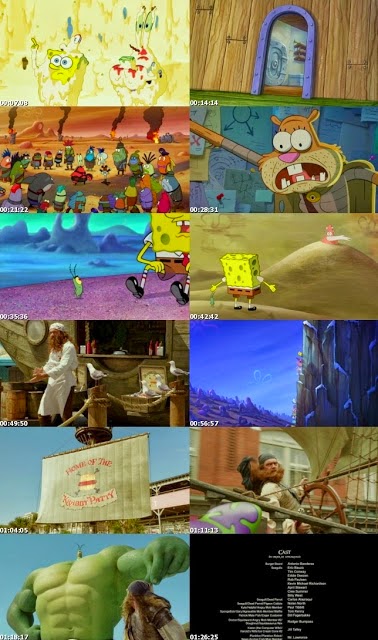 You can check out the ShuffleBot from Party Rock Anthem. Not too bad for a big-square-headed robot huh. He's doing a fine Spongebob on 16 beats EDM.

Our technique described so far will still be the same here. The catch is it's faster. Much faster. You will need to hop in a smaller width and kick more compact (isolation becomes even more important).

Keep your move clean and go from hiphop to shuffle.

There're a few things I want to warn you first when practicing Spongebob.

Party Machine is another popular technique in hiphop. These two look similar but different in a fundamental way. First, check out this gif.

Can you spot the difference?

Did you spot the difference?

The reason I am being annoying is that I want you to spot the difference yourself first. In that way, the new material will be still around your head the next time you practice. 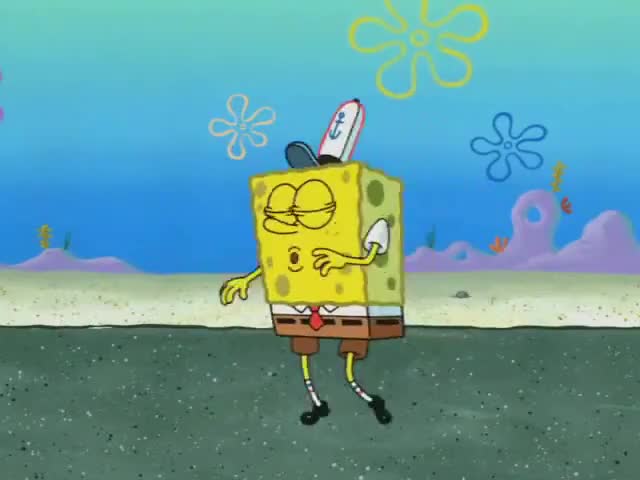 It's a good habit to have when browsing through YouTube.

In Party Machine, when you kick, you are hopping from inside to outside. You are using the momentum of kick to transition outward.

In Spongebob, the transition's the other way around. You are trying to kick your butt with your heel. When you kick in, your body tightens up in the center at the same time. That's why you hop in towards the center, not outside.

The difference sounds miniscule. But in practice, you use them differently to give a different vibe in your move. It's more of the difference in the groove rather than technicality.

Whichever one you practice first, one of the grooves feels more natural than the other. Knowing both and being able to alternate the two will expand your dance repertoires.

Take this section at your discretion.

One of the most challenging things in my early days is to find a place to practice.

My house wasn't big. And when I practiced in my room in the 2nd floor, the noise was too much. It was a constant battle with my family.

Compared to other steps, you will be making a fuss in Spongebob. You are basically jumping constantly. This is a perfect fit for outdoor or studio practice. But if you are an indoor practice type, this will make too much noise.

Instead, you want to consider practicing Club Step, Happy Feet, Cabbage Patch. They are less prone to opening a hole in your floor.

The mechanic of Spongebob is solid and simple. But like Club Step, there is a big room to play around with your speed and leg arrangement. And the step is transferable to almost any music. Its dynamism is definitely fun at a club.

Everyone starts somewhere. Once you get master one thing, it will take you to many directions that were previously unknown.

The Spongebob – Dance Tutorials With Smilin

Here comes the 8th episode of our Electro Swing Dance tutorial series. The dancer and tutor Smilin teachs us today in the Electro Swing Academy how the dance move “The Spongebob” is deciphered in detail and what its special features are. 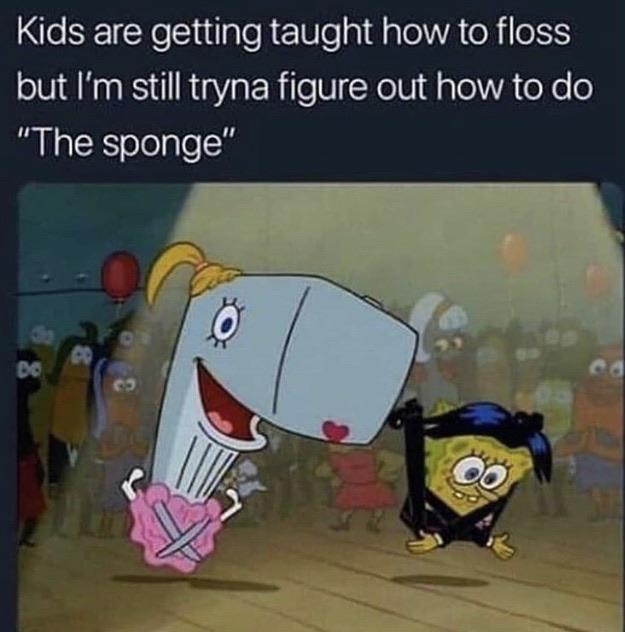 Enjoy, move, dance, have fund and don’t forget to #KeepOnSmilin!

1. Jump, while the left foot goes up

2. Now, jump with your left foot to the side while your right leg kicks to the side

3. Now jump again, this time your right foot goes up

4. Jump with your right foot to the side while your left leg kicks to the side

We have a great merch collection for this series too! Some nice and cute clothes with the claim “It Must Schwing” from our “Electro Swing Academy”, including the dancer and tutor Smilin. You’ll support us with every buy and we may be able to shoot another season for you in the future! 😀 🔥 💃 🎩 🙌 #ItMustSchwing

SUPPORT US WITH OUR MERCH HERE!

If you have any questions, ideas or requests, feel free to write them in the comments. Now have fun watching, learning and dancing. 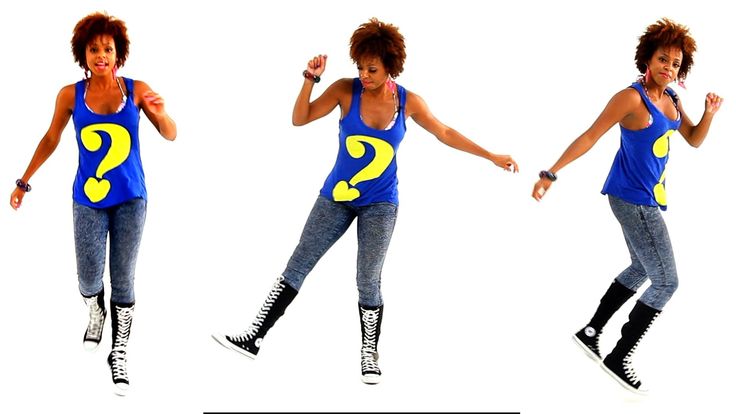 Follow the Electro Swing dancer and tutor Smilin, from Bavaria in Germany, HERE and read a super interesting interview with her HERE!

And here is the Blog Post with the complete Dance Tutorials Season 1, which is updated with every new episode. So in the end everything is very compact and you can comfortably improve your skills HERE! 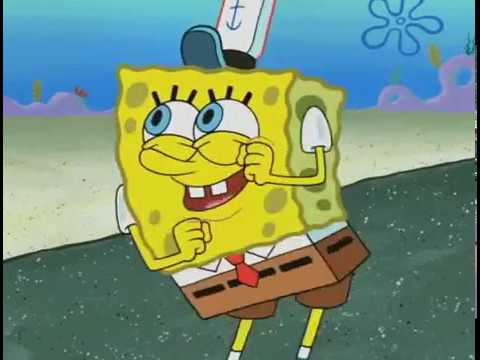