Home » Misc » How to dance on crutches

How to dance on crutches

For most of us, using crutches to get around would be an excuse to sit on the side of the dance floor. A select few take those crutches and outshine everyone around them. Here are the stories of four men who have two things in common: they use a crutch or two, and they are very, very good dancers.

BBoy Luca "Lazylegz" Patuelli was born in Montreal, Quebec with arthrogryposis, a muscle disorder that only affects his legs. He grew up in Bethesda, Maryland and began competing in hip hop dance competitions when he was fifteen years old. Patuelli has performed onstage with Kanye West and other well-known musicians and dancers. In addition to dancing on crutches, he also breakdances on his extremely strong arms. Patuelli recently graduated from Concordia University with a degree in marketing. In addition to his studies and dancing in competitions and exhibitions, he mentors young dancers and does motivational speaking at schools. See Patuelli in a breakdance battle with Petit Freez, an amputee dancer also on crutches.

Ma Li was 19 years old and already a professional ballerina in China when she lost her right arm in a traffic accident in 1996. She went through a depression and attempted suicide, but her parents' support changed her outlook. Ma opened a bookstore to support herself. In 2001, She was invited to take part in a performing arts showcase for the disabled, and the love of dance returned to her.

Zhai Xiaowei was only four years old when his left leg had to be amputated after a tractor accident. He grew up participating in all kinds of sports anyway, and was training for the cycling events of the disabled Olympics in China when he met Ma Li in 2005. He'd never even considered ballet before Ma recruited him to dance with her. Zhai moved in with Ma and her manager/boyfriend and trained 12-16 hours a day. 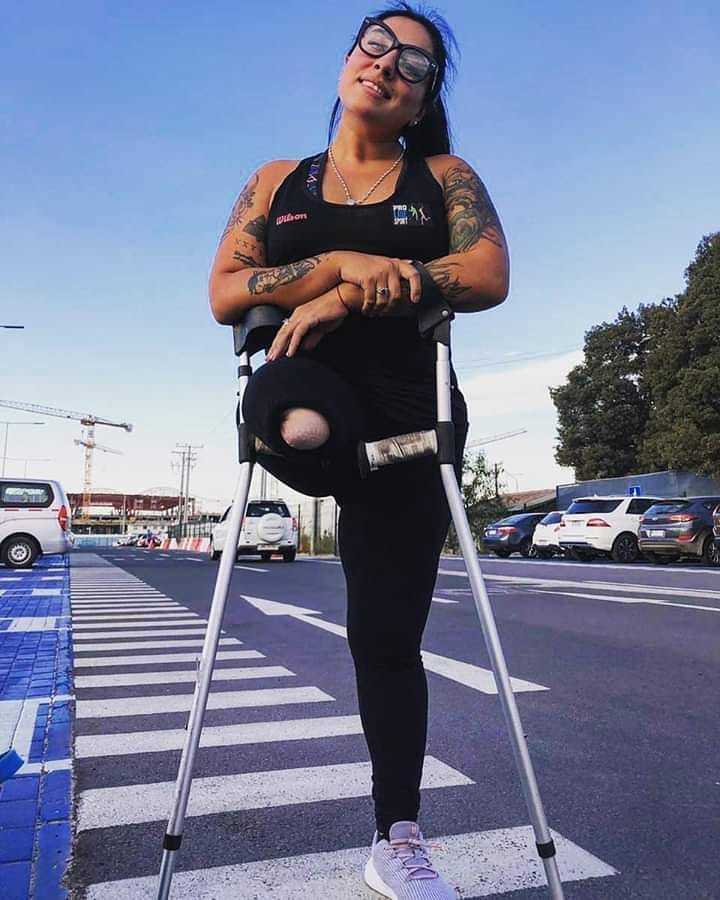 The hard work paid off when the two entered the CCTV national dance competition in 2007. They were the only disabled act in the competition, but they won the silver medal and placed first in the audience voting. See their performance of Hand in Hand on video.

Reynaldo Ojeda is a salsa dancer from Bogota, Colombia. He was born with only one leg, but with the support of his family, was active in all kinds of sports as he was growing up. He began dancing as an adult, and now teaches salsa dancing on weekends and hopes to compete in worldwide salsa competitions. See a video of Ojeda dancing with Claudia Lopez.

Bill "Crutch Master" Shannon has bilateral hip displacement, arising from Legg Calve Perthes syndrome. The result is that his legs work, but can't support his weight properly, so he supports himself with crutches -in more ways than one.

Shannon's balance on crutches led to dance, which led to hip hop dancing with crutches as works of art, as you can see in this video. Shannon is an award-winning artist, dancer, and choreographer.

1.9K Likes, 41 Comments. TikTok video from Brianna Michi (@briemichi): "On this episode of Brianna Tik Toking with her crutches #foryou #dance #anklesprain #crutches". As It Was.

As It Was - Harry Styles 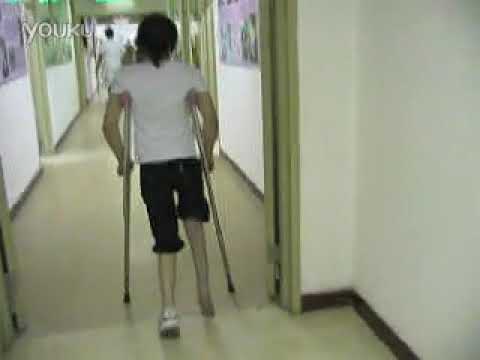 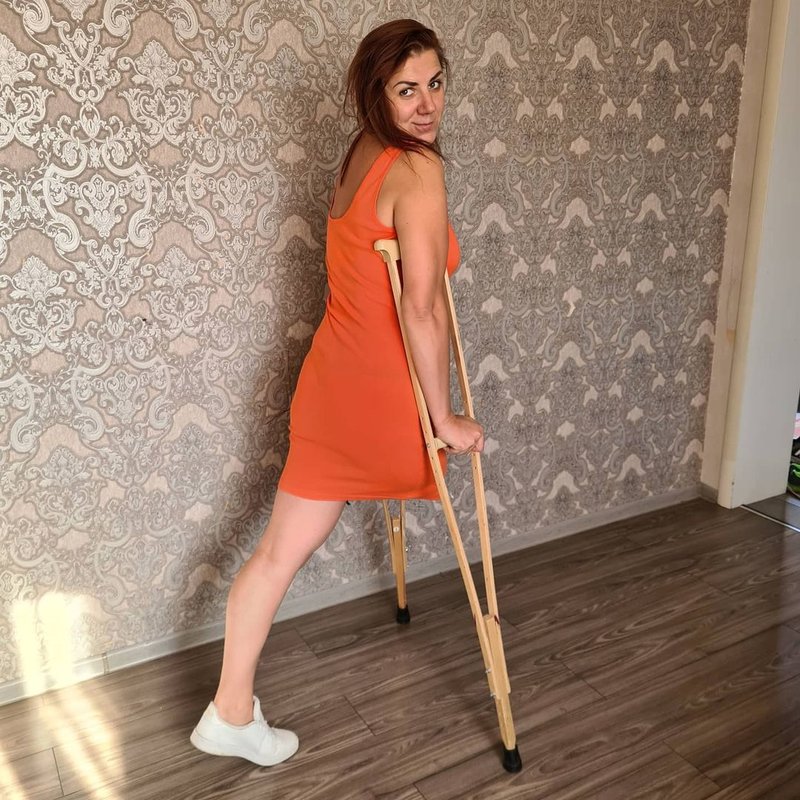 TikTok video from Elle Turner (@elleturner_xx): "Showing you can still do things 🥰 #fyp #onlyinmycalvins #dancing #trend #lizzo #crutcheslife #disabilitytiktok #crutches #fitness #juststrongambassador #gymsharkwomen". You can still go to the gym on crutches it’s just a different experience, you can do anything you put your mind to . About Damn Time.

the song is nuestra canción by monsieur periné - gracia

@_tayloryb #allamerican Taylor Beard of Cincinnati is #healing from #injury . Until then check out her moves. #ilike #dance #dancing #crutches #trackandfield2k22 #trackandfield #riseofthewoman

152 Likes, 10 Comments. TikTok video from PROLIFIC SPORTS (@mycontentisthebest): "@_tayloryb #allamerican Taylor Beard of Cincinnati is #healing from #injury. Until then check out her moves. #ilike #dance #dancing #crutches #trackandfield2k22 #trackandfield #riseofthewoman". I Like.

I had to change the#choreo a bit to do this with my #crutch I did my best! dc: @allicia1345 still obsessed with your #dance girl!#fyp #foryou #disabled TikTok video from 💀Christina💀 (@rarebonesx): "I had to change the#choreo a bit to do this with my #crutch I did my best! dc: @allicia1345 still obsessed with your #dance girl!#fyp#foryou#disabled". Doing this dance with my forearm crutch . You Know You Like It.

I may be on crutches atm but I wasn’t about to miss out on this trend :) #motive #motivexpromiscuous #dance #crutchesdance 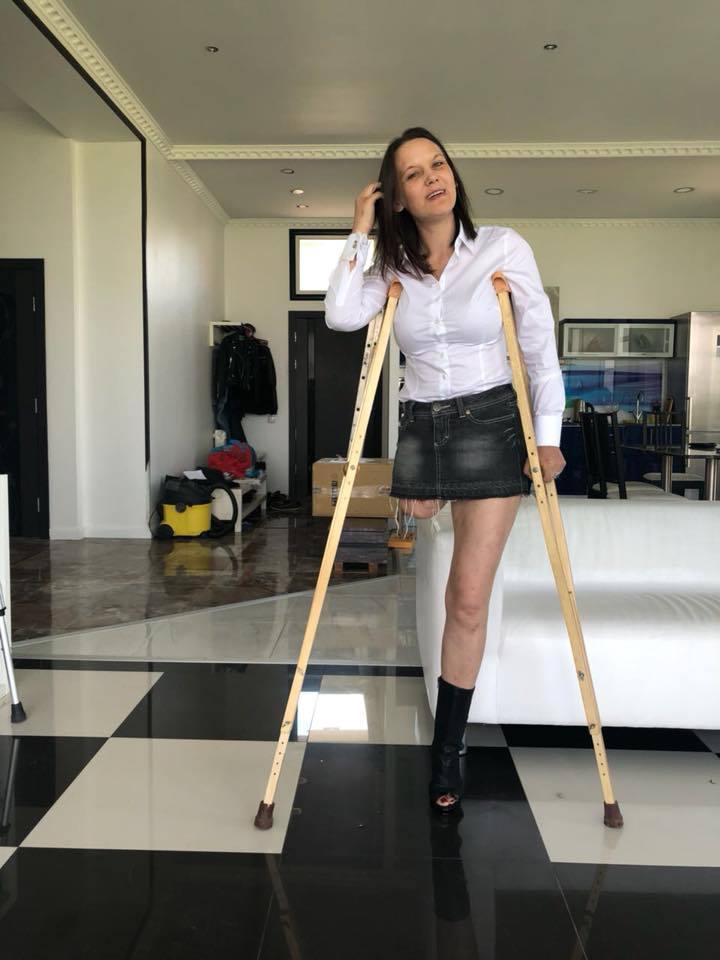 TikTok video from Charlotte 🍒 (@_charlotte.calvert): "I may be on crutches atm but I wasn’t about to miss out on this trend :) #motive #motivexpromiscuous #dance #crutchesdance". motive x promiscuous.

Categories: The most interesting dancer from those that I have seen. I happened to see a clip on MTV, and what this weirdo is doing on crutches. I was shocked. Then I found out that the guy's name is Bill Shannon, he has been disabled since childhood - he cannot give a full load on his legs, so he is always on crutches. He invented a special form of choreography. And yet how artistic and beautiful. I'm not going to say all sorts of pompous things. But - cool, immeasurably cool. 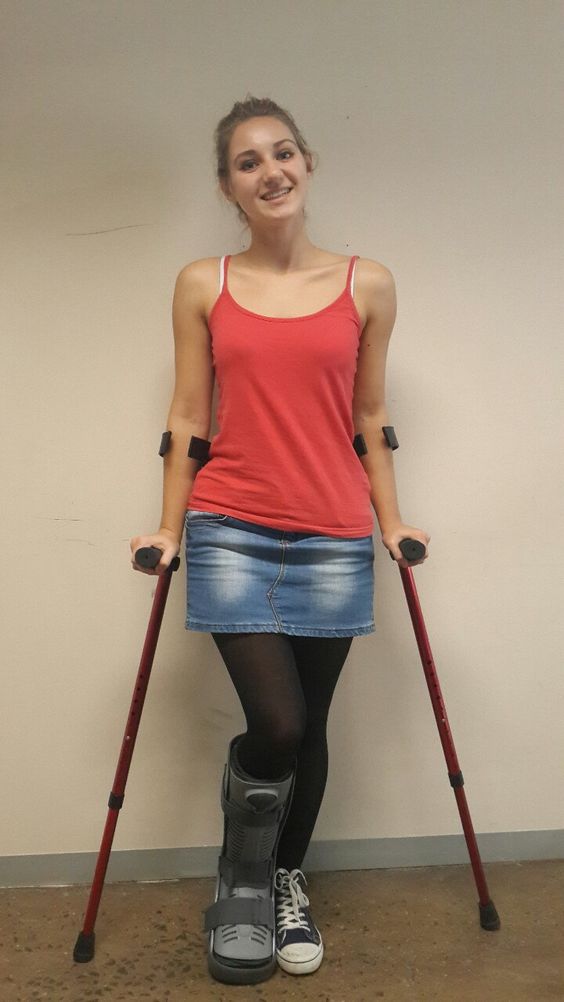 "BILL SHANNON is an amazing example of self-realization, overcoming personal barriers through art. An American, actor and director who created an unusual kind of alternative art - "the aesthetics of wandering".

Bill began to dance in the streets. He could not fully lean on his sore legs, and he could not walk on ordinary crutches either. The problem was solved by a grant that Bill received to develop lightweight, functional crutches with shock absorbers. The crutches allowed him to move around any But by evening, his legs were in severe pain, and then Bill decided to move around on a skateboard with the help of his exclusive crutches. Shannon has mastered the movement on the board so much that he rides it in the city, enters buildings.0027

- In the life of a disabled person, many accidents constantly occur, which are associated with the actions of other people. I performed on the streets of Novgorod and deliberately dropped a bottle of water. Then everything depended on passers-by, on their reaction - someone will rush to help, someone will pass by. 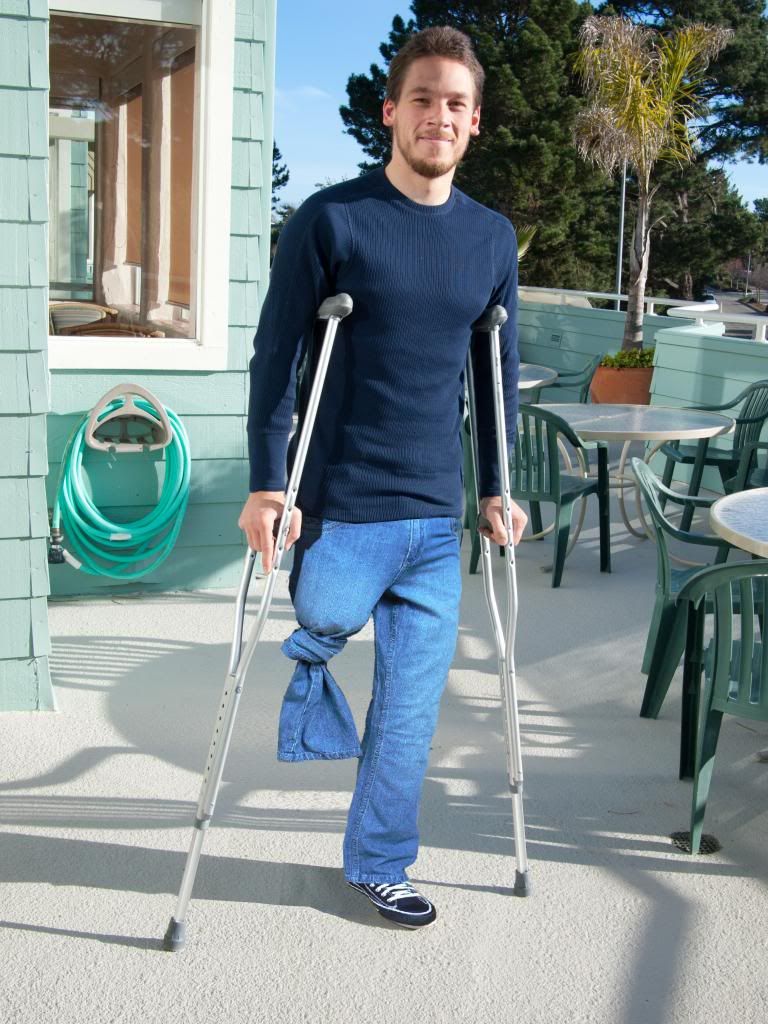 Such dramatizations are my "aesthetics of wandering", this is the intersection of the culture of disability and ordinary culture. This is the physical contact that I bring people into to see what we want but can't put into words. My goal is to bring together all the problems, both personal and social, to bring together with the help of my art."
Here is an example of his work:

By the way, the person who is trying to help him reminded me very much of Shnura. But really, sometimes help is so annoying :-)

He seems to me more of a real provocateur than a virtual one...

PS By the way, I found this comrade quite by accident. And it has nothing to do with my current state.
PSS I also want such crutches....;-)

Actor and artistic director of the Diesel Show Yegor Krutogolov, who was injured in a terrible accident on October 20, is recovering at home and learning to walk again. He does it with his inherent sense of humor and artistry. Egor recorded a video of how he learns to dance in his apartment, gathering his friends as spectators.

"I'm learning to dance again, then I'll think about how to walk", - he wrote. In the video, Yegor is dancing on crutches in a room against the background of numerous cups. These are the awards of his son Leva, the champion of Ukraine in karting. At the end of the video, the perky laughter of the audience is heard.

Earlier, Krutogolov thanked everyone for their support in his first video message. 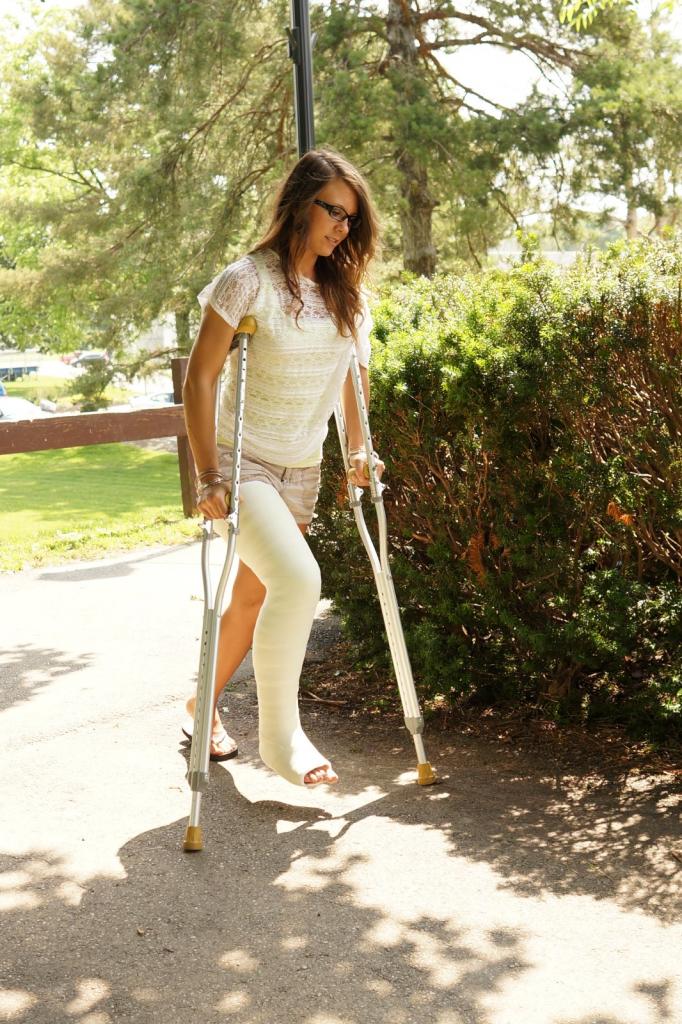