How to play garba dance

Before we get into details of Garba dance, here are two simple facts which will reduce your anxiety on learning this popular dance. Number one, there is no definite form or steps of Garba dance. No one can dictate that you have to dance exactly like this or that. It is free flow tribal dance where you go with the music. If you get to the rhythm you are all set.

Number two, it is more fun if there is large crowd for the dance, but there is “no minimum requirement”. You and your friend, just two of you can get the same energy and create the effect of thousands.

Garba performances often include singing and a musical accompaniment traditionally provided by Dhol (double-headed drum) and the similar but smaller Dholak; hand clapping; and assorted metallic idiophones, such as cymbals. Historically, the Shehnai (a double-reed instrument) guided the singers, but by the early 21st century that instrument had largely been replaced by a synthesizer or harmonium.

The basic dance formation is that of a circle that moves counterclockwise; if space is constrained or there are many participants, dancers form concentric circles that move in opposite directions. Ultimately, the performers circle around an image of a mother goddess, such as Durga, or around a symbolic representation of her creative energy—often an illuminated clay pot or a water-filled vessel. Dancing begins slowly and gradually increases in speed.

Generally the actual dance performance begins in the night time or after dark so to make the proper ambience for dance. All the participants gather at the open space or at street corners. An idol or photograph of the goddess is kept in the center and a circle is formed around it. Ghee (purified butter) or oil amps are lit in front of ‘Mataji’s Sthanak’ (goddess place), which is put in the Chowk (wooden stand).
At initial stages dancing begins with slow tempo and reaches at a fast tempo. 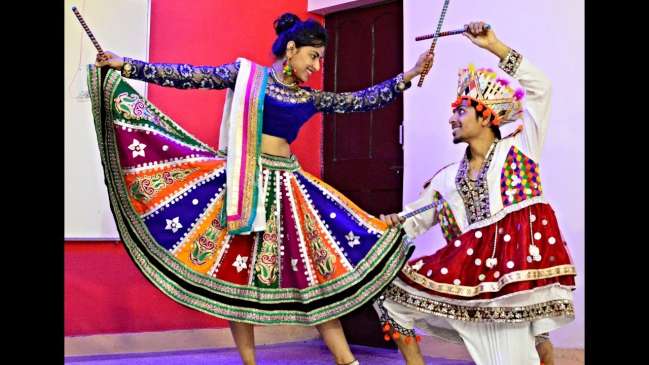 A Dholi or drummer who sit in the center keeps the rhythm. Some times, the women also carry ‘Mandavali’, on their heads and it is made up of bamboo chips covered with a red silk piece of cloth. The Mandavali symbolizes the goddess and they dance with it for some time and later put it in the center.

After scouring through many dance lesson videos, we found following video has beautifully explained the simple steps of Garba which is very easy to follow. One more time, these are some of the steps to get you going but don’t hesitate to create your own dance form and people will follow you. Take a look and let us know if anything else would have helped you better to learn this dance form.

Garba in Austin and across the world

Garba and Dandiya Raas are popular worldwide. In the United States more than 20 universities have Raas/Garba competitions on a huge scale every year with professional choreography. Garba is also very popular in the United Kingdom where there are a number of Gujarati communities who hold their own Garba nights. In Canada, the largest Navratri festival in the western world is held annually in Toronto. They say “Ae Hallo” for fun, which means “Come on! Lets start!”

In Austin there are various places where Garba is organized every year. Each temple – Austin Hindu Temple, Sai Baba Temple and Radha Madhav Dham organizes Garba with food carnival where with dance you can also relish the Indian food.

Olympic figure skating champions Tatiana Volosozhar and Maxim Trankov picked this already super hit Garba song from one of the Bollywood movie. The Russian pair even added an Indian twist to their attire and simply amzed everyone.

The unique performance they presented sent the audience roaring with applause. The judges, too, must’ve been impressed. The two champions not only got the highest scores, but also went on to bag their fourth gold at the competition.

Garba a word which reminds everyone of Gujarat and this has indeed become an eccentric and exciting dance form known worldwide. Garba is the dance form which people usually perform during nine days of Navratri in honor of divine power of various forms of goddess. It’s a one of its kind dance form which every Gujarati is very passionate about. Garba songs are so vibrant that even if a non-Gujarati listens to a Garba tune then he/she automatically starts to sway and tap the feet. Check out some of the famous forms below with the step by steps video tutorials:

Dandiya is one of the most popular dance form of Garba, where the men and women who are decked up in colorful attire dance in pairs with a pair of beautifully decorated sticks.  The sticks usually symbolize swords and in older days people used to dance with swords. They swirl and keep changing there positions and opposite partners while dancing in praise of their Goddess Amba.

Dodhiyu garba style is a form which includes total six steps. It is usually performed in small groups because the coordination among all the players is extremely important. The khelaiyaas perform some steps in the front and then return back with different steps. People keep on changing their styles depending on interests and no. of people involved.

This dance form is a beautiful amalgamation of Garba and Dandiya. It’s performed in small batches and is an unusual format of winding and unwinding dupattas between each dancer.

“Dholida Dhol Re Vagad Maare Hinch Levi Che” is a very famous song that you might have heard. Here is how you can do 8 step garba with hinch:

In this form the khelaiyaa (players) generally clap once in one complete set of steps. The tune associated with this is also unique which people usually get acquainted too and change their steps accordingly. 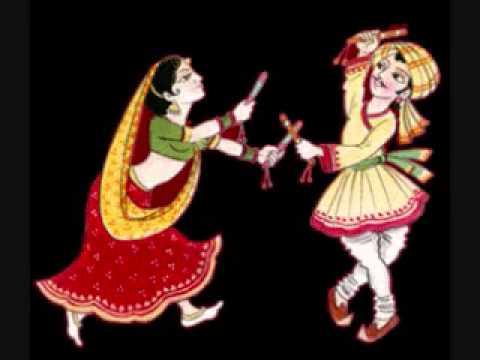 Here the danseuse clap twice in one single set, the footsteps here are also quite different from ek taali form. Generally the first clap is taken in your front and the second is done after taking a reverse swirl.

As the name suggests here the people clap three times in one complete step. The claps are usually done by gradually decreasing the height from your right shoulder towards your left leg. This is the most easiest of all the three dance forms and can be learnt very quickly.

Apart from these are many region specific dance forms where people customize it as per their choice and common interests of all the people. Garba is all about dancing to the tunes as per your mood and learning new steps from your friends every time someone gets a new move to make it more graceful and enjoyable. 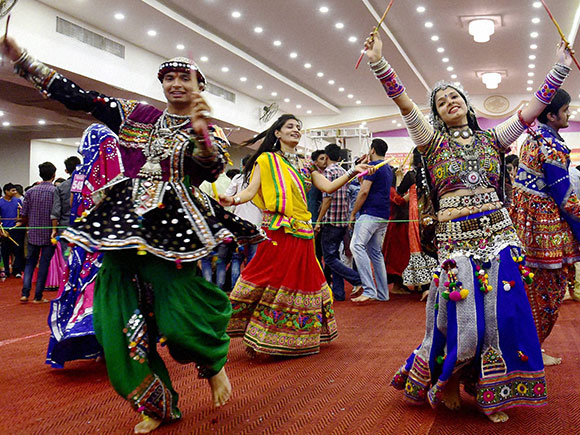 Those nine nights are full of fun and dancing it out to your heart’s content. 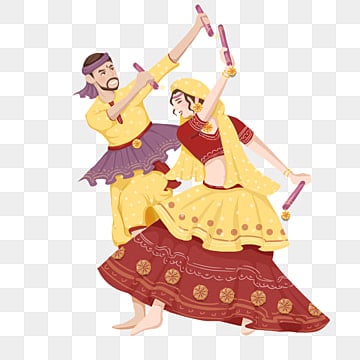 You can use this royalty free vector image "People Performing Gharba Dance at Dandiya Raas for Dussehra or Navratri" for personal and commercial purposes under Standard or Extended License. The standard license covers a variety of uses, including advertising, UI design, product packaging, and prints up to 500,000 copies. The Extended License provides all the use cases as the Standard License, with the right to unlimited printing, and also allows you to use the downloaded vector files for merchandise, resale and free distribution. You are using an outdated browser. For a faster, safer browsing experience, upgrade for free today.