Home » Misc » How to morris dance

How to morris dance

Morris dance is an English folk dance traditionally done in groups of six or eight hardy men–hardy men, mind you, who are wearing pretty kerchiefs and jingle bells. During a morris dance the dancers, who most often wield wooden sticks, step rhythmically and execute choreographed moves, weaving among each other and hitting each other’s sticks when appropriate. A quick quiz: which of the following statements is true? 1) Morris dancing has likely always been open to both men and women, and today many teams are integrated. 2) Morris dancing may have one time come across a not-very-hip form of artistic expression, but today it has become really cool. The answer…depending on who you ask, BOTH!

Some who practice morris dance claim it originated in the late 15th century, but while there is mention of dancing in Church records of the time, the first appearance of the name “Morris dance”–possibly derived from Moorish dance, or dance of the Moors, though
there are many other theories of the term’s origins–doesn’t appear until the 17th century.

Whatever its origins, morris dancing is believed to have arisen as as a ritual dance meant to invoke a magic power and bring protection against evil rather a purely social dance. Over the centuries a specific culture has developed around the ritual, complete with its own terminology and carefully prescribed roles dancers must play.

First, to prepare ourselves to try some morris dancing, let’s learn some morris terminology:

— the morris: the term dancers use to refer to the world of morris dancing.
— side/team: a morris troupe
— set: the a number of dancers used for a regular arrangement. (This is usually six or eight.)
— jig: a dance performed by one or two dancers rather than in a set. (Not to be confused with an Irish jig)
— tradition: a collection of dances from a particular area.
— ale: a private party where a number of morris sides gather and dance for each other rather than for an audience.

Next, we must assume the set of roles required of each side:
— a squire: usually the side’s leader who calls the dances and decides the side’s program, or at least the side’s administrator. 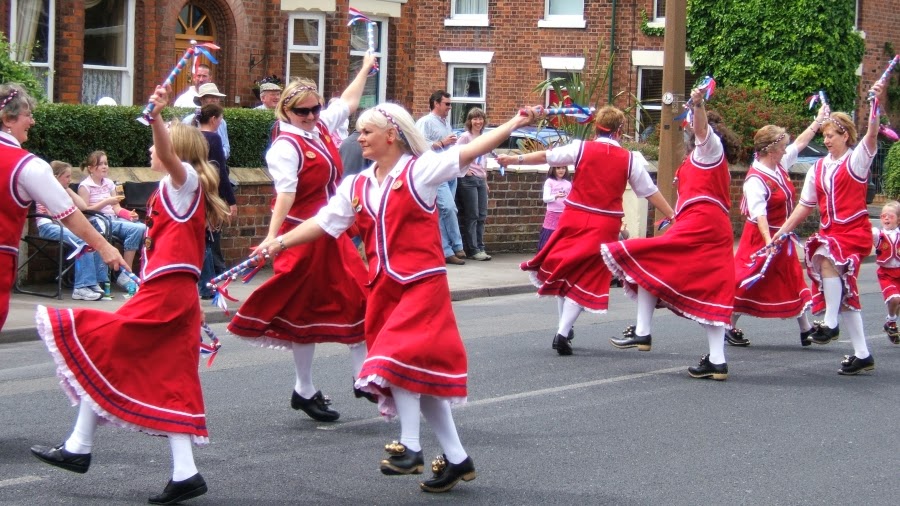 — a foreman: trains the dancers and is responsible for the high standard of the side’s dance.
— a bagman: the member of the side who keeps the side’s money and equipment (nowadays kind of like a club secretary)
— a ragman: the member of the side who co-ordinates the team’s “kit” or costmue: what would morris dancers do without bell pads, ribbon pads and sashes?
— one fool, or more: costumed and silly, the fool will entertain the crowd throughout the dance.
— a beast or a hobby: a dancer in costume made to look like an animal. This dancer entertains the children.

Okay, enough of this preparation! Let’s look at examples of real live morris dancing so we can figure out how to do some of our own.

Over the centuries a number of varieties of morris dancing have developed. Which of the following should we do in class?:
— Cotswold Morris: normally danced with handkerchiefs, sticks and hand movements. Watch the Isca Morris Men dance with kerchiefs. 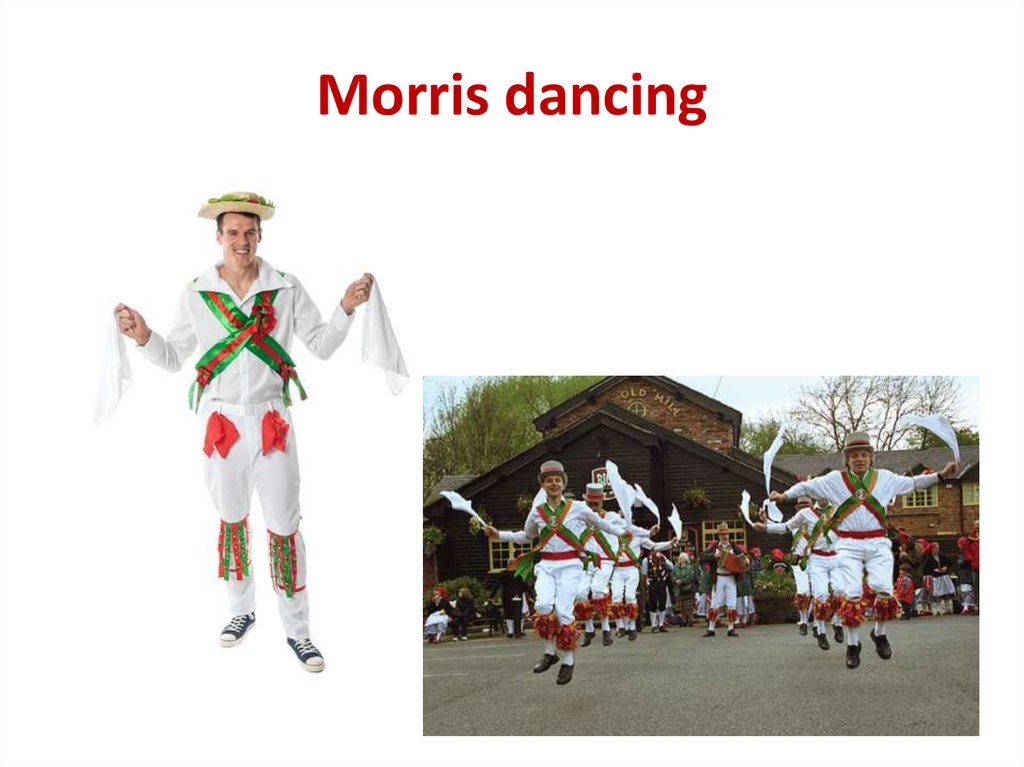 — Border Morris: a version from the
English-Welsh border with more interpretive choreography and multi-colored costumes. Often the dancers paint their faces in black or other colors. Watch Wicket Brood’s border morris dance (the dancing starts at 0:37)

— Molly Morris: prancing and stomping from the Midlands. Watch the colorful Gog Magog Molly Dancers. Watch the Seven Champions dancing Molly Morris to a tune
that–though we’re not experts–is probably not a traditional Morris accompaniment from the 17th century. 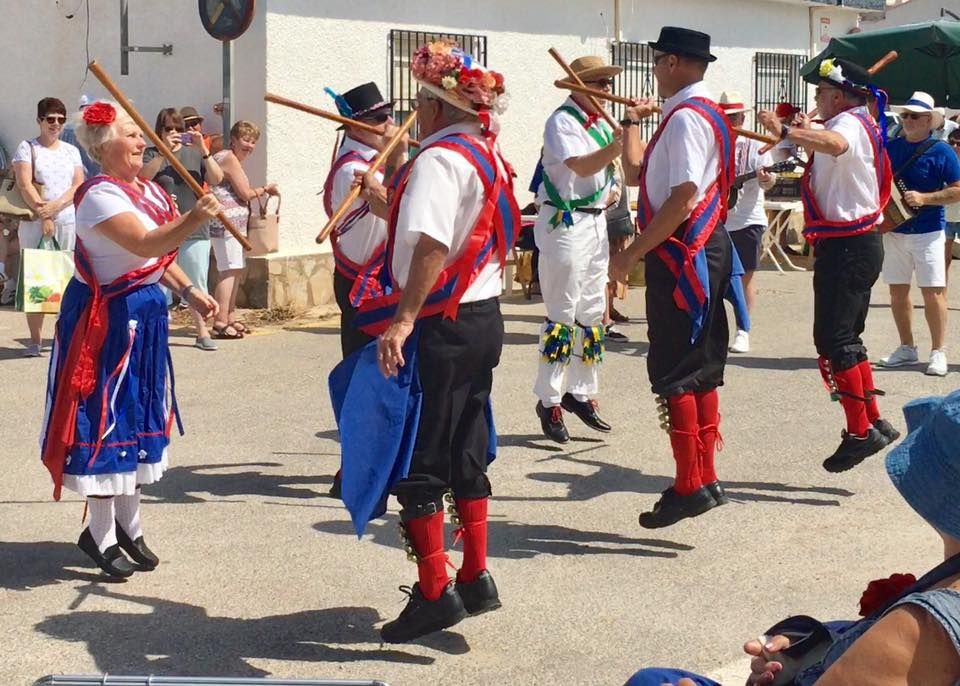 So which of these amazing morris variants shall we try in class? How could we ever choose? Let’s fire up “Morris Reel” by Sean Quinn and try them all.

Morris dance, also spelled Moresgue, Morrice, Morisque, or Morrisk, ritual folk dance performed in rural England by groups of specially chosen and trained men; less specifically, a variety of related customs, such as mumming, as well as some popular entertainments derived from them. Similar customs are widespread throughout Europe and extend to the Middle East, India, and parts of Central and South America. Notable examples are the Perchten dancer-masqueraders of Austria, the ritual dances such as the moriscas (or moriscos), santiagos, and matachinas of the Mediterranean and Latin America, and the călușari of Romania. 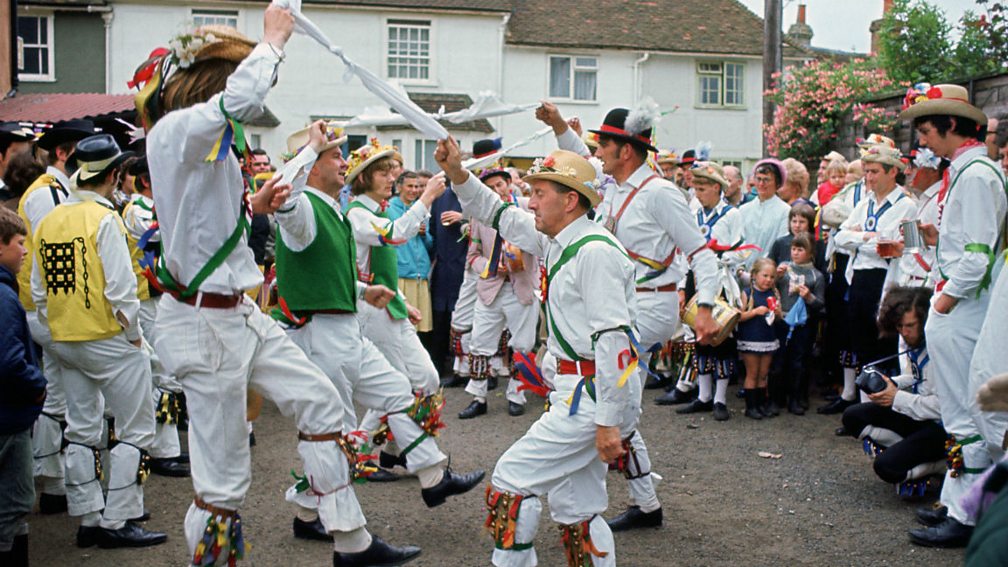 The wide distribution of such dances suggests an ancient Indo-European origin. A common feature of many of them is that of a group of dancing men attendant on a pagan god who celebrates his revival after death. Often the dancers wear white clothes and dance with bells fastened to the legs or body. A feeling that the dances have magic power or bring luck persists wherever they are traditionally performed.

The central figure of the dances, usually an animal-man, varies considerably in importance. In some cases, he may dominate the rite; in others—as in many English Morris dances—the young men in the corps d’élite may dominate, with the animal-man and other dramatic characters either relegated to the subsidiary role of comics or omitted. The name Morris is also associated with the horn dance held each year at Abbots Bromley, Staffordshire, Eng. This dance procession includes six animal-men bearing deer antlers, three white and three black sets; a man-woman, or Maid Marian, and a fool, both carrying phallic symbols; a hobby horse; and a youth with a crossbow who shoots at the leading “stags” whenever possible. A comparable surviving animal custom is the May Day procession of a man-horse, notably at Padstow, Cornwall. There, the central figure, “Oss Oss,” is a witch doctor disguised as a horse and wearing a medicine mask. The dancers are attendants who sing the May Day song, beat drums, and in turn act the horse or dance in attendance. The name Morris is also associated with groups of mummers who act, rather than dance, the death-and-survival rite at the turn of the year.

Throughout history, the Morris seems to have been common. It was imported from village festivities into popular entertainment after the invention of the court masque by Henry VIII. The word Morris apparently derived from “morisco,” meaning “Moorish.” Cecil Sharp, whose collecting of Morris dances preserved many from extinction, suggested that it might have arisen from the dancers’ blacking their faces as part of the necessary ritual disguise. 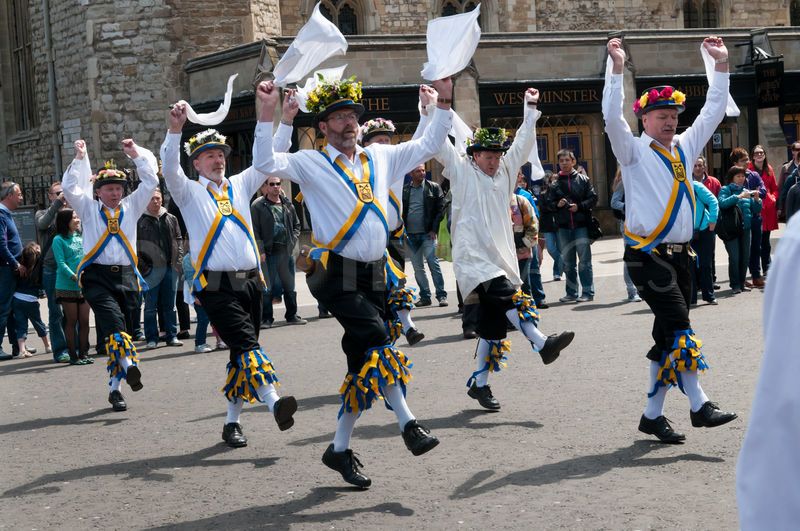 The few solo Morris dances are called Morris jigs; an example is the Shepherds’ Hey. The name Morris dance is sometimes loosely applied to sword dances in which a group of men weave their swords into intricate patterns. Compare sword dance.

This article was most recently revised and updated by Amy Tikkanen.

Looking at the morris dancers who stomp, ringing bells, to the howl of strange musical instruments, it is quite logical to assume that you are seeing a typically English stage in front of you, some old peasant rite or ancient ritual. Men in white dancing with handkerchiefs, no doubt strange enough to be considered native English. The same can be said about the ongoing friendly disputes between rival organizations, the Morris Federation and the Morris Ring, about how to properly dance this dance: should it be danced by only men, or only women, or both together?

In fact, like many traditions that seem to be the unshakable foundations of English life, Morris came to us from abroad, although no one knows exactly where. It may have been brought to England by Italian dancers during the Renaissance. According to some sources, the name "morris", or "moreska", comes from the word "Moor": the dance became widespread at a time when everything Moorish suddenly came into fashion. Therefore, it is possible that, even if the Morris dancers maintain the English tradition, the ankle bells originally served to give the dancers an exotic, foreign look. Nobody knows the truth, but it is known that Morris was well known to the English peasants already in 1640, when Oliver Cromwell spoke condemningly about this ritual.

There are two key dates in the history of the Morris dance. The first is 1448, which is the first written record of morris dancers in England. Another date is more accurate. It is the second day of Christmas 1899 in Headington, Oxford, when the young musician Cecil Sharp saw the Morris dance for the first time, and it changed his life. Fascinated by the dance, Sharp began asking about it the musician William Kimber, who accompanied the dancers. 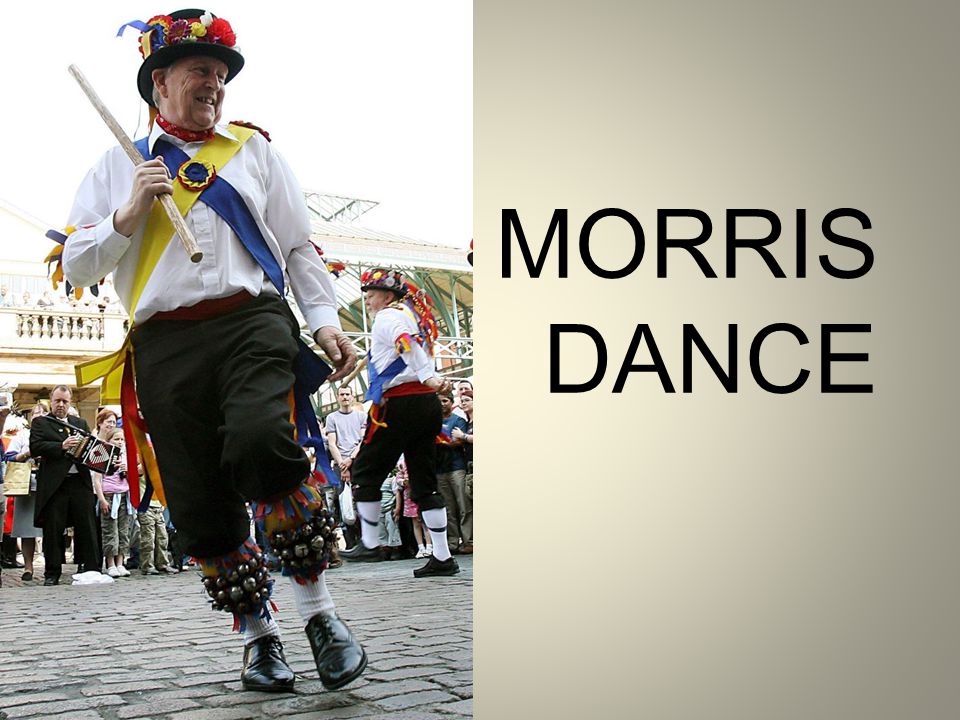 Later, after considering what he had heard, he decided that he would begin to collect these dances, and without delay set to work.

That was the great era of folklore collectors. Young people of stunted appearance soon dispersed throughout the countryside of England, recording stories, and also, following the example of Sharpe, songs and dances. Sharp took his first steps in the villages of Somerset, Ralph Vaughan Williams collected tunes in Norfolk, Sussex and Surrey. In 1911, Sharp founded the Folk Dance Society and published several song books for schools, prudently erasing all ambiguities and obscenities from the texts. In those days, the education system avoided such subjects, but the combined efforts of Cecil Sharp and Lord Baden-Powell, the founder of the British scouting movement, were able to return the English folk song to the national consciousness.

Morris experienced a real revival in the 1960s, when hundreds of new dance groups appeared, creatively developing and rethinking the traditions of their area. 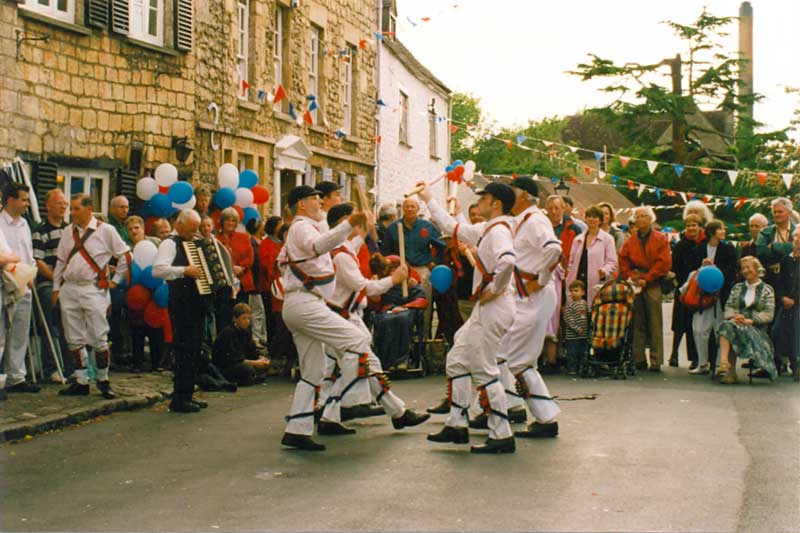 In this they were greatly helped by the recollections of older people who still remembered how Morris danced in the days of their youth.

Cotswold Morris is danced in the counties of Gloucester and Oxford with headscarves and sticks.

Mollies are danced mainly in the county of Cambridge.

Longsword Morris is danced in Durham and Yorkshire with long metal swords.

Studio of modern variety dance "Morris" was established in 1997 on the basis of the Center for additional education of children "Sozvezdie". 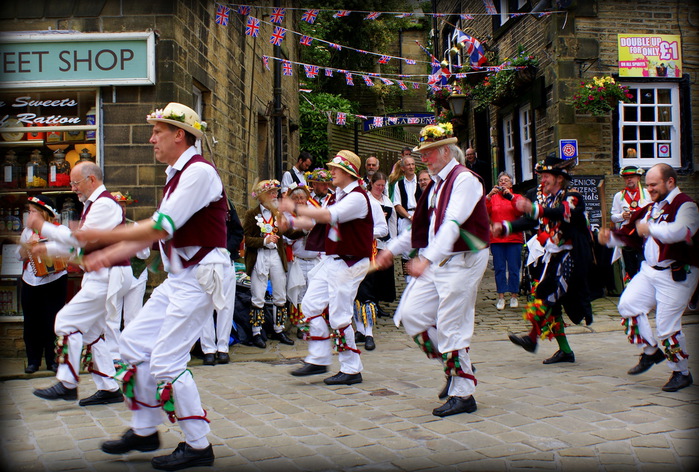 The team of the modern pop dance studio "Morris" - a participant in various concerts, competitions, festivals, competitions, where he invariably became the winner and prize-winner: 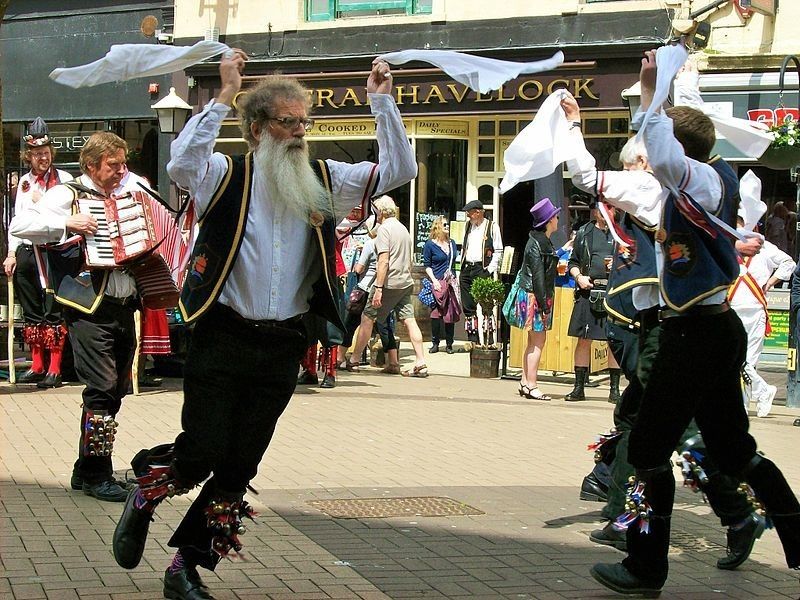 , Interregional traditional tournament on modern choreography "Primrose" 2003-2016 Menshikh Igor Vitalievich has been the organizer of this tournament since 2003.

Including holding charity concerts: at large city venues, in shopping and entertainment centers of the Severny microdistrict and in the city of Voronezh as a whole, at the regional recruiting center, for children with alternative development, large families, etc. Every year, the studio takes an active part in large creative projects: New Year's performances in the region and the city, is a regular participant in concert thematic programs at the Sozvezdie Center for Children's Education in the Kominternovsky District.

In October 2009, SSET "Morris" was invited to Kazan to participate in the All-Russian anti-drug program "Train to the Future".

In 2012, several groups of the collective visited Paris. 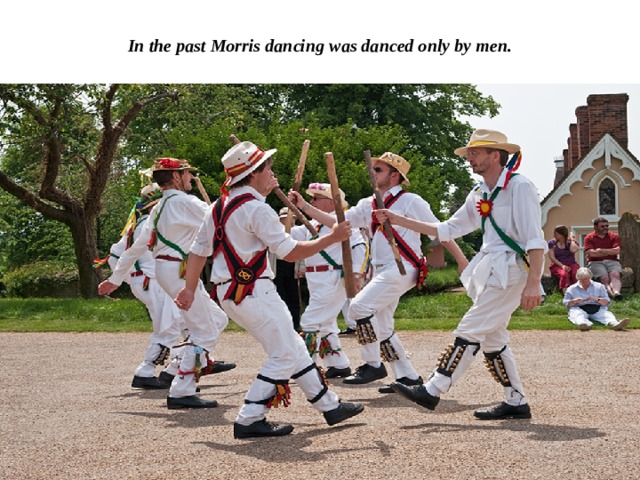